Hooray - Learning Really Does Happen Everywhere (i.e. my kids do sometimes listen to me!)

One thing you hear a lot when starting out with home ed is that kids will learn anywhere, especially if they're interested. It's a theory that's really difficult as a parent to put your full trust in, especially having been through the school system where you're told that learning only happens in a classroom with a teacher.

So I was pretty thrilled this morning when Miss L came bounding up the stairs with this picture she'd drawn (a regular occurrence in this household, she loves drawing). 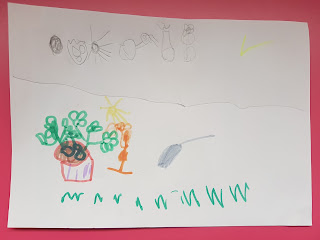 This is her masterpiece of the morning

To explain, the main picture is of a bean plant growing and the orange bit is it being watered.
The icons across the top are everything that "a plant needs to grow" (her words not mine!). These include dirt, seeds, sun, water, the shoot and the final plant.

To add some context, a few weeks ago we started a Spring board (more on our boards in another post!) and Miss L expressed an interest in growing something, so after some rooting around we found some random beans and planted those. We had a natter at the time about plant cycles and what a plant needs and in true 5 year old fashion it looked as though not a lot of what I said had really gone in. 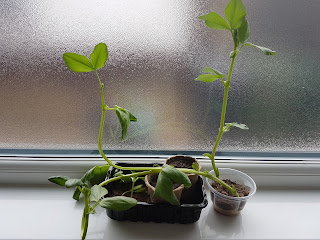 Yet here is the living proof, tah-dah, that some things clearly stick. It's actually a pattern I've started to notice emerging. We'll visit somewhere, chat about something or do some kind of activity where the attention at the time seems non existent, then somehow 1-2 weeks later (sometimes longer) they'll suddenly utter some pearl of wisdom gleaned from earlier activities and I'll be surprised at how much they were actually paying attention to (also sometimes not, honestly there are times it's like I'm talking to a brick wall!).

I think it just goes to show that placing a bit of faith in a child's desire and ability to learn and that their natural curiosity will shine through isn't a bad thing and that they will pick things up, despite how it may look at the time!
Posted by Kez @ Little Fluff at 9:09 AM 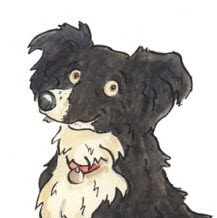