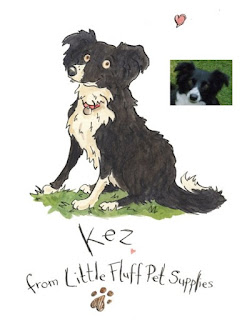 Mum has had a picture of me done, how smart does this look? It captures me perfectly. The only thing I’m missing is my bandana but since I lost that somewhere in the wilderness last month it’s probably better that I’m not wearing it in the picture! Apparently it has been done by a lady called Elinor and I must say she’s very talented. I wish I could draw like that but it’s difficult holding anything in my paws let alone a pencil. I think every pet should have one of these in their bedroom, people always have photos of themselves on the wall so why not us pets to? She’s done loads of other pictures which can be seen on the pet sketch page. It gets my golden paw of approval anyway.
Email Post
Labels: pet portraits pet sketches