Yesterday (Friday 22nd) saw an amazing event (well according to humans, to me it meant a walk in the rain which is a first!) the Olympic Torch passed through out little town. It had to be the wettest day in Britain's Summer time history, I promise the rain was horizontal! Yet with true British grit there was a great turnout and lots of people lined the street. I was a little disappointed with the canine turnout though, there weren't many to be seen at all. 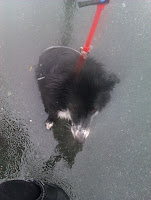 I proudly donned my waterproof coat (it did nothing) and my bright yellow collar in the hope that it would tempt the sun out and ease the rain (the collar also did nothing) but despite the rain driving into my eyes I enjoyed the party atmosphere and watching all the parade pass by. We were lucky enough to be stood at the point where the torch was passed over from one runner to the next although how they kept that flame going I'll never know, it gave me a sleepless night pondering it.

Here are some pics of me 'enjoying' my watery walk, all that excitement tired me out and I had to take to my bed for the afternoon! 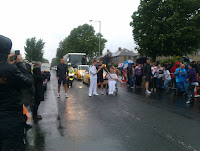 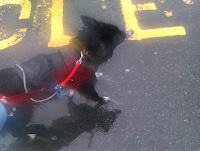 A big well done to all the runners and people in the parade (including the police escorts) who braved the elements, I was outside for about 40mins and was soaked and frozen by the time I got in, nothing a good rub down with the towel didn't cure by the way, so I can only imagine how they felt by the time they finished. It was a great scene though and no doubt something I'll never get to see again so I feel a very privileged pooch indeed!
Email Post
Labels: olympic torch olympics 2012 torch parade morecambe 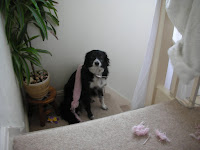